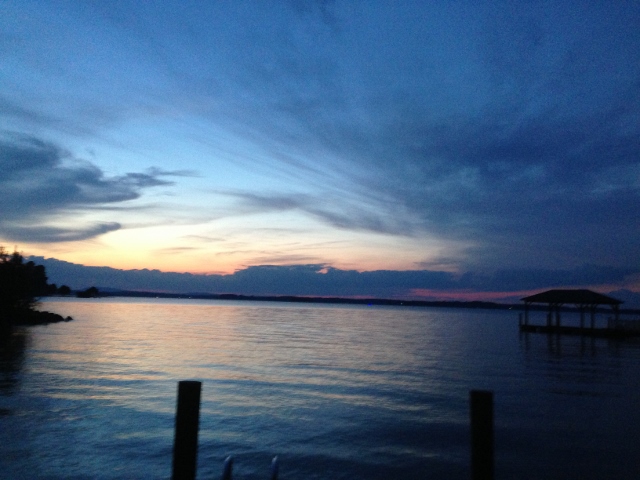 Earlier this month I wrote a column for Business Today on the regional approach the lake Norman Chamber of Commerce takes to small business development and growth for our business members in Huntersville, Davidson, Cornelius and the greater lake Norman region.

Recently I had the chance to watch the sun set over our beautiful Lake Norman. The bright orange skyline kissed the rippling waters. Teased by the wind, it skipped across the expanse that touched my soul and I was reminded of a passage in a book by Norman Maclean that read “Eventually, all things merge into one, and a river runs through it.”

In the early 1980s, long before I joined the Lake Norman Chamber, my mom moved to Huntersville. I was struck on my first visit to North Meck with the rural country side. Considered a suburb of Charlotte, Huntersville was largely pastureland. Cornelius, just to the north, was a former mill town and surprisingly the real population seemed to reside in the little college town of Davidson.

Before the end of that decade, Huntersville businessman John Cherry would share a vision of what we could accomplish as a region by creating what was known at the time as the North Mecklenburg Chamber. The Chamber was composed of businesses in Huntersville, Davidson, and Cornelius with Town Board representation by all three towns. John created an opportunity for businesses to network and support each other. The organization quickly grew with the population, as did it’s greater voice in the county and state.

In 1996, I was hired to serve as the Chamber’s president and one of the primary challenges we faced was the shortage of classroom space. North Mecklenburg High School had the largest enrollment of any school in the state. Yet, Charlotte Mecklenburg School Board Members refused to acknowledge the desperate need for a new High School in north end of the county.

I still vividly recall a group from the Chamber going to a CMS meeting to passionately advocating for the new school. We orchestrated the collective voice of the towns, community, and business leaders and through determination and a commitment to our kids, we were successful in getting Hopewell High built.

Soon we saw our communities begin to grow together.  Folks living in Huntersville, working in Cornelius, employing staff from Denver and Mooresville, and shopping in Davidson. The name of the Chamber was changed to reflect our more regional identity – Lake Norman – but our commitment remained steadfast in our roots to North Mecklenburg.

The Chamber stretched its ability to advocate for business when we successfully lobbied for an access management study for Hwy 73. The NC DOT countered such an undertaking had never been done. It took the collaborative efforts of three chambers, three counties, and several municipalities but it resulted in what is known today as the Highway 73 Council of Planning.

It was the Lake Norman Chamber that first brought the three North Mecklenburg towns together at quarterly dinner meetings to share ideas and opportunities. That process evolved into four towns as Mooresville was invited to join.

The Lake Norman Chamber also gave birth to two other outstanding organizations serving our region – Visit Lake Norman and the Lake Norman Economic Development Corporation. Both were initiatives of the chamber. Community leaders recognized the unbridled opportunities when you partner the towns together with the chamber of commerce.

John Cherry told me that it was difficult early on to recognize the sum of parts was greater than anything we could have accomplished on our own. Even today, almost three decades later, some think that progress means going back to where we started – working separately, rather than together. I think the past thirty years prove that is not the sound strategy. When we work hard, work smart, and work together, there is no limit to what we can accomplish for our communities, commerce, and citizens. The Lake Norman Chamber has indeed been a catalyst to bring our communities together and accomplish so much that each could not have done independently. We have grown our business community and we are working to meet the challenges and opportunities that lie ahead.

Standing on that dock, watching another day end and a new one set to take its place, I realized our North Mecklenburg communities have indeed merged into one.

Eventually, the vision has become reality and the energy and passion of our people run through it.