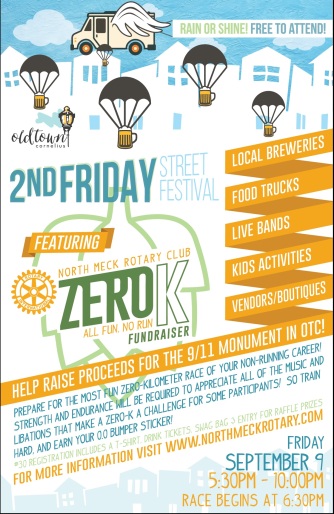 On September 7th, I’ll be 57! To celebrate this milestone in my life, I have accepted the North Mecklenburg Rotary Club’s ZERO K Challenge. I know many of you are asking why undertake such an arduous challenge so late in life.  Sure – it’s going to take some extra training to get into shape, to get my mind prepared, and not just compete – but actually take the Gold in the ZERO K.

That said, I am reminded of the Rotary Credo – Service Above Self. Sure, I could stay at home, preparing if not already getting started for the Carolina – Miss State Tailgating the following Day – September 10th.  But you simply have to put community service first.

In a way, I have been preparing for this event most of my adult life.  When some of my friends were running 3K, 5K, 10K… and yes, some competing in the Iron Man Marathon – I decided long ago I didn’t desire to be an Iron Man – I wanted to be a Sixty Minute Man.

While my buddies were out pounding the pavement in their sneakers, I was sitting back with a cold Brew listening to the Tams, the Catalinas, the Embers… and yes, the General himself and Chairman of the Board. Rather than sweaty socks and running shoes – I much preferred the sand under my feet, shagging to the tunes of my favorite beach music with a Carolina Girl.

I don’t take the Zero K Challenge lightly.  I have already begun the difficult training required for the event which takes place September 9th 5:30-9 pm at the Oak Street Mill in Cornelius. 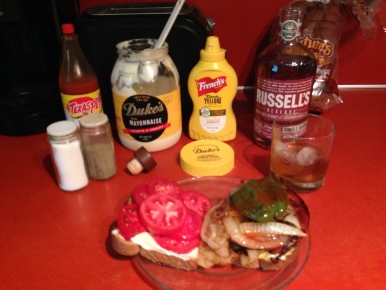 with Duke’s Mayonnaise piled high. It’s necessary to properly coat both sides of your bread with at least 4 to 5 teaspoons of the Pride of the South! I top it off with fresh jalapeno peppers and tomatoes from my garden and two slices of Vidalia onion.  The onions and peppers should also be fried up in virgin olive oil.  I use my Gandmother Feemster’s cast iron skillet to give it just that special flavor. Texas Pete also gives it a robust kick.  Several splashes are recommended.

A good fried up bologna sandwich should be chased by a smooth brown liquor drink.  For my northern friends who are unfamiliar with the term brown liquor – I mean a great bourbon.  In this case, I’m training with Russell’s Reserve.  No – its not my special bourbon but one that I really like – a single barrel bourbon from the fine folks at Wild Turkey. Some may ask would Jack Daniels work just as well?

Perhaps, but for training purposes I think bourbon over whiskey to get the mind right. Other preferred bourbons: Jefferson Small Batch, Woodford Reserve or Knob Creek to get the blood flowing.

Not everyone can expect to reach their maximum endurance in their first ZERO K and I don’t take it lightly. My experience in Pi Kappa Phi Fraternity at Winthrop and the United States Jaycees have helped prepare me for this moment – and yes, I feel up to the task.  Many are called – but few are chosen.

So yes, I am competing – and I will take home the Gold in the first annual North Meck Rotary Club ZERO K Fundraiser to help raise awareness for the 9/11 Monument.

John Kepner, the president of our Rotary Club wholeheartedly supports my rigorous training and diet for the event.  John might I add is also the owner of one of two Huntersville Funeral Homes and Crematoriums and he along with Sam James deeply appreciates the business.

So – are you up to the challenge?  If so, Join us – you can register for the ZERO K here.